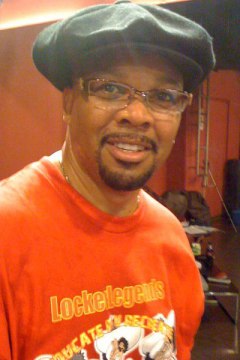 Known as James Higgins on the books but respected by many as “Skeeter Rabbit,” a pioneer in the Locking style. His street name, “Skeeter Rabbit,” also created way to a fundamental step in Locking which a dancer does a hop and shuffle step. You can see most lockers doing this today and as well in Locking routines!

Most of the information below comes from the LockingLegends.net (which Skeeter is co-creator and editor) website and as important as it is to have Internet/Technology, its important to remember to research the history of street dance styles and dancers! Go to the originators and dancers from that generation, ask them about what it was like, how it came to be, who was involved, and what can be done today to strengthen the culture.

Although the Original Group was formed, Don Campbell would sometimes assemble impromptu groups of pioneers together to perform live, at various function at Hollywood Funtions such as the Hollywood Theater owners Christmas Events and the Friers club parties. They would perform as “The Lockers” this included pioneers such as Fred Berry, Mike “Peekaboo” Frenke, Tito Collins, Skeeter Rabbit,Tick, Mr X and others. By the end of the 1970’s the original group had gone through some changes, and The name was used by various members of the Original Group as they’re assembled to perform at various times in history.”

“Currently he has been inovative as a leader in todays movement to preserve the Locking Artforms as a historian, teacher, motavator  & writer. Og Skeeter Rabbit as he is now known as, has taught workshops, siminars and Judged competitions world wide. He is one of the creators and currently the editor of Lockinglegends.net website.”

Check out another great interview with OG Skeeter Rabbit

“When I retired as a Deputy Sheriffs Detective I began to research the name, and it shocked me. Because the NAME was so unique, (Skeeter I had since birth, and Rabbit was added in 1972 when I was first seen doing the Skeeterrabbit step)I knew it was not by accident, I caught up with Don Campbell on the phone. He told me that Greg Pope had given Stephan Nichols my name, I then found a website and it sold DVDs of Stephan Nichols Locking. It said he learned to Lock from Greg Pope in 1974. That was impossible and I was confused and devastated.

But the story gets even deeper, Tony GoGo sent for me to come to Japan in 2004, The Electric Boogaloos was also there, when I met Stephan he said he meant no disrespect. We sat down and he told me this… In the late 70’s early 80’s he would meet Greg, Basil, and Shabbadoo at a club in Hollywood. They would get in free, so one time at the door, Basil and Greg introduced him as “SkeeterRabbit” and the management had heard of me . So they let him in from that point on. HE BACAME KNOWN AS SKEETER RABBIT and it was never corrected. So you see how the commercial world of streetdance. Stephan said he would use the name Big Skeet of the EBs from that point on ‘ But unfortunately the dance world would not let decades of misuse be undone. So strangely now I’m known as OG SkeeterRabbit.“